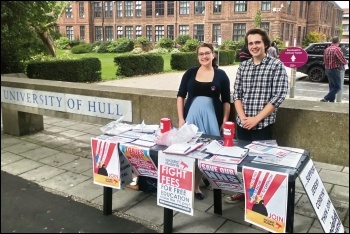 Hull Socialist Students held a campaign stall on the first day of Hull University's freshers fair on 17 September, calling for the Tories to be kicked out and for socialist policies. 40 students signed up to join.

At our first meeting, 'what is socialism?' 12 people attended with others indicating they would attend future activities.

A meeting on Marxist economics was agreed for the following week with plans for campaigning activity to follow.