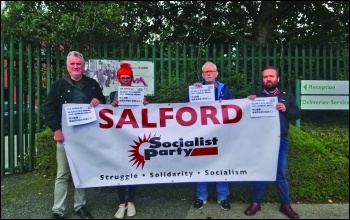 On 24 September members of Salford Socialist Party branch visited the headquarters of Wilkinson Star - the official UK distributor of Jasic products in the UK (the address is also the base of Jasic UK) - to demand the directors put pressure on their counterparts in Shenzhen, China to end the repression of their employees and to give rights to their staff to join independent trade unions (see 'China: Solidarity with victimised Jasic Technology workers').

Both statements are a catalogue of lies, including accusations of interference by "foreign-funded illegal organisations" and "extremists" determined to incite the workers. It appears that silencing critics and media distortion extends all the way from Shenzhen to Salford!