London Underground workers on the Piccadilly Line took strike action from 26 to 29 September. Striker Gary Harboard, an RMT transport workers' union rep in the Piccadilly and District Line West branch, spoke to the Socialist on the picket line. 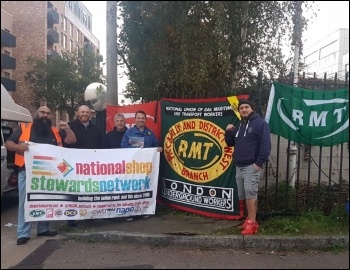 What is the strike about?

Management is telling the media that the RMT has no reason to take action, what is your response?

The quote from management was "we don't understand what your issues are" but these issues have been going on for the last 18 months. Eight weeks ago we were given a guarantee that management would abide by the policies and procedures in place and, within a matter of two weeks, they were ripped up.

There comes a time when we have got say to the membership that there is no other option but to take strike action. Out of the 71% of members who voted in the strike ballot, 95% voted to walk out.

The turnout shows the strength of feeling in the depot. Many of the drivers are new and this is the first time they have taken action. The strike is absolutely solid. Not one train on the Piccadilly Line has run.

RMT members are on strike on the Piccadilly Line but also on other fronts, particularly over driver-only operation, showing the RMT is at the forefront of taking action.

Yes, and it's primarily led by the members. We're telling the leadership that we're not prepared to put up with the conditions that bosses are trying to impose on us and we're in it for the long haul - as the long-running strike on Southern Rail shows. If bosses want a battle on London Underground they will have one.