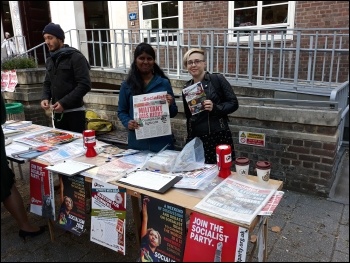 Socialist Students societies have been taking part in this year's freshers fairs - meeting students eager to get involved in campaigning and political discussion. These reports, written by Socialist Students members from several campuses, highlight the enthusiasm for socialist ideas and campaigning that we encountered. Get involved, socialiststudents.org.uk

KCL Socialist Students distributed flyers to incoming students. More than 50 stopped to sign up, keen to learn more about socialism and Marxism. In terms of campaigning, besides building the fight for free education, we were also supporting the KCL cleaners' now victorious campaign for their jobs to be brought back in-house.

We ended up with a stall next to the Conservative Students group. Considering that the first text that caught the eye on our leaflet was "Tories Out", it was a humourous juxtaposition. It made it very clear that more students were interested in left-wing ideas than in what the Conservatives and Liberal Democrats had to offer!

As well as interest in socialist ideas, there was a definite mood of frustration among students we spoke to - frustration with the Tories and Brexit, frustration with Corbyn and his inaction on tackling the Blairites, and frustration at the capitalist system that has given us Trump, May and their cronies. We sold nine copies of the Socialist Students magazine, Megaphone, signed up 90 interested students, and hosted a well-attended meeting at the end of the second day.

Students were eager to sign our petition and have discussions on topics like Brexit, Corbyn and tuition fees. Next, we are organising a meeting on 'socialist ideas and the Labour Party' where we will explore the lessons that can be learnt from the struggle of the Militant-led Liverpool City Council for the fight against Tory austerity today. 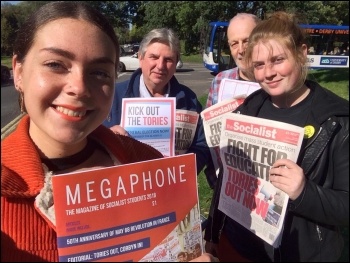 At Derby we were campaigning to kick out the Tories and demand a general election. The response was great with many students agreeing that change is needed now. Lots supported the idea that we need to end Tory austerity and privatisation, and that young people have an important part to play in the fight for a Corbyn-led government with socialist policies. 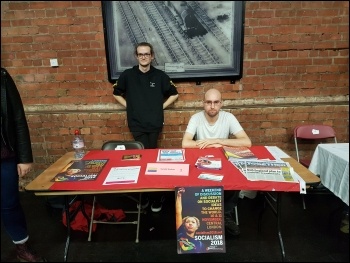 At Lincoln freshers fair we were successful in attracting members for our newly affiliated 'official' students union society. We were placed next to the feminist society stall and noticed a trend.

Despite the odd student who would go to their stall but not ours (or vice versa) it was often the case that students went to both stalls or neither. I am sure the reason is obvious to the readership!

The "Tories Out!" sign on our table grabbed attention and showed the desire for a general election as soon as possible. 16 students attended our first meeting discussing 'What is Socialism?'

We've spoken to hundreds of college and university students across the north east. Our stalls have attracted lots of attention, most importantly from students who liked our message of, "Tories out now! Fight for free education!"

But, alongside the positive response we have had to contend with management and campus security attempting to chase us off - even though we weren't on their premises! At Northumbria a security guard warned us that if we didn't move (from the public footpath) the police would be called and I would end up in a police cell!

But the harassment from these educational establishments gave us a certain amount of street cred. Students were impressed that we stood our ground.

One person we met was Judy, a law and human rights student from Kenya: "My brother said it would be different here, so I was shocked to see people sleeping in the streets." We discussed the crisis in Kenya and the role of imperialist powers like China, the US and Britain.

Judy's enthusiasm grew as we outlined our socialist answers to the these problems and she asked to join the Socialist Party and agreed to help us start a Socialist Students society at Reading University.

Over 100 students signed up for membership at Liverpool freshers fair. There was a very positive response to our society. Some of the good responses included students coming up to the stall and saying that they were looking specifically for it and some students saying that they had read up on the activities of the society already ahead of the fair.

300 students signed up to Socialist Students at the University of Sheffield and 80 at Sheffield Hallam. There was a general appetite for socialist ideas. We got 36 to our first meeting. We took ten new members to protest at the Tory Party conference.

We signed up 119 interested students at Leeds freshers fair. This was reflected in the positive turnout for our first meeting of the new semester, with over 20 students in attendance.

I spoke to several of our new members after the meeting and felt an instant connection amongst the group. I believe that this passion and eagerness to get involved will lead to a year of successful campaigning from the Socialist Students branch at the university.