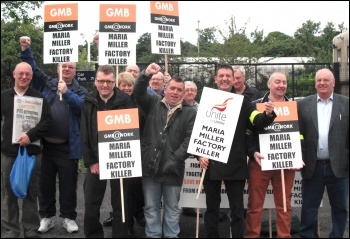 In 2012, Socialist Party members were involved in the strikes by Remploy workers against the Tory coalition government's closure and redundancy programme.

In 2008, Brown's Labour government axed 2,000 jobs and 29 factories. The remaining factories were closed in 2013 and the residual company sold to US corporation Maximus in 2015 for an undisclosed sum at the time.

Recently, it has been revealed that this sale was for a knockdown £2 million. But Maximus made profits of £7.1 million from "lossmaking" Remploy in 2016-17, with a dividend payout to shareholders of £2 million over the past two years, according to the Sunday Times. While extracting this profit, a further 100 employees were made redundant.

In the meantime, Maximus continues to cream in the profits - which doubled in 2017 to £26 million.