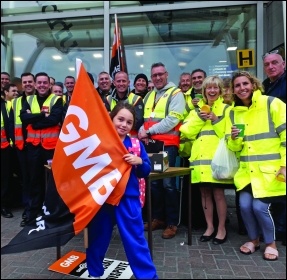 Management had refused to meet the workers' demand for a pay rise of at least 3%, and offered just 2.2% plus a £100 one-off lump sum. The bosses' revised offer is a two-year deal, worth 2.2% and £250 for the current financial year - which we understand equates to 3% in total - and then another rise in April of 3% proper.

This is a climb-down by the employer. GMB union members have shown they won't be pushed around by management, with a large and lively presence of pickets at the front of the airport on every strike day.

Eddie Parker, regional organiser for the GMB, said: "The increase achieved by the membership was only proposed because of the ten days of strike action taken, and the intention to take a further 15 days in October.

"It appears that the days of fair and transparent negotiations are being replaced by companies making unreasonable proposals, and expecting members to be grateful for the crumbs offered.

"GMB members have shown that by showing solidarity and keeping the principles of the trade union movement, aspirations can be achieved."