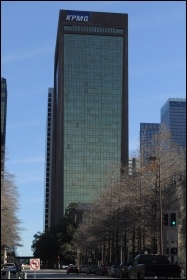 Even a report by the accounting regulator, the Financial Reporting Council (FRC), recently suggested Britain's big accountancy firms should be banned from earning lucrative consultancy fees at businesses they audit, or broken up entirely. This follows a series of scandals that have rocked the sector. Here, Andy Beadle looks at the murky world of accounting, and below, a former Big Four 'partner' lifts the lid on the accountancy firms.

The murky world of accounting is not easy to follow but it certainly reveals a lot about big business.

Before Labour Party conference, shadow chancellor John McDonnell said that Labour has radical plans to overhaul the auditing industry. He warned that the "cartel" - the 'Big Four' accounting firms that dominate - could be broken up.

External auditing of all firms is a statutory requirement in company law. The law is supposed to protect shareholders' investments.

It is meant to be a check on the executives shareholders employ to run the business. The auditors are supposedly on the shareholders' side.

Often in big companies there is a conflict between shareholders who own the wealth and high-salaried executives. Though not always. Frequently they are the same people.

It is a long-term issue but has been particularly revealed in a swathe of recent incidents.

As well as auditing, accountancy firms make even more money as consultants, giving handy advice to executives. Accounting firms are not required to be open about the consulting work they provide for companies.

Incidentally, at the same time as advising governments on tax reform, accountants are also advising multinational clients on how best to arrange their affairs to avoid taxes. Tax avoidance is legal tax dodging. Consultants can also show their clients how to present accounts so that executives maximise their bonuses.

Having effectively written the company reports for their client as consultants, they then look over them as auditors. Aren't these guys practically marking their own homework?

Should workers care about which bunch of parasites is fleecing us? Maybe. But auditors' behaviour has wider consequences. For example, when retailer BHS collapsed in 2016 it left a huge pension deficit and the loss of 11,000 jobs. The FRC - the UK's accounting regulator - said auditor PricewaterhouseCoopers' (PwC) "conduct had fallen significantly short."

Now, two associations representing individual shareholders have said the FRC is "too close" to the large audit firms. They have called for wider representation on the FRC. From their point of view, you can see why. Thirty-four current or former Big Four partners sit on the board and committees of the FRC!

They are coming under increasing scrutiny following reporting irregularities at Carillion, Tesco and BT as well as General Electric in the US.

UK construction giant Carillion collapsed in January with liabilities of nearly £7 billion. This involved 43,000 jobs (including 19,000 in the UK), 27,000 pensioners and 30,000 suppliers. It was the second largest construction firm and the largest ever trading liquidation in the country. Concerns about Carillion's debt position were raised in 2015.

In May, a parliamentary inquiry said Carillion's collapse was "a story of recklessness, hubris and greed, its business model was a relentless dash for cash" and accused directors of misrepresenting the financial realities of the business. The report's recommendations included regulatory reforms and a possible break-up of the Big Four, who were all involved.

This shows the alarm bells ringing for the capitalist class. The perception abounds of systemic corruption. People see the Big Four helping executives to cook the books to deceive their workers, the tax office, their own shareholders and the public. In March, independent regulators identified serious problems globally in 40% of audits. The same month Stephen Haddill, £500,000 a year chief executive of the FRC, called for an inquiry into whether the Big Four should be broken up.

In April the government announced a 'root and branch' review of the FRC led by Sir John Kingman, chairman of insurer Legal and General and a former Treasury official.

But a real 'root and branch' transformation would be based on the understanding that the pursuit of 'free markets' is a myth.

The Big Four should be brought into public ownership, along with the banks. Compensation should be paid only in cases of proven need. Instead of millionaires and billionaires in charge we need control and management by democratically elected workers' representatives. We need a workers' government with a socialist programme.

The Big Four are 'partnerships', meaning that they are owned by the senior managers (the partners). The remuneration received by the partners is eye-wateringly high, often millions of pounds, with early retirement and huge pensions the norm. While fabulous rewards are available to the partners, the way the firms function is to ruthlessly drive junior staff to make huge personal sacrifices, working extremely long hours making personal life almost non-existent.

This 'business model' is sustained because of the glittering prize (partnership) for those juniors who do not fall by the way-side (and there are many casualties). It creates a cut-throat competitiveness among staff.

These firms have regularly been exposed in scandals. Most recently, KPMG has been disgraced in South Africa through its ties with the Gupta family business and, in the US, three partners have been charged with fraud relating to audits. KPMG are not alone and the list of scandals is long and shocking.

The vast majority of major corporations globally employ one of the Big Four as auditors and another as tax or business advisers. These roles rotate over time but the near monopoly and the scandals have been a constant. Worse, city-led 'corporate governance reviews' (usually advised by the Big Four) reinforce the city's rules requiring businesses to employ these auditors and advisors.

It is a well-oiled machine for extracting money that should be used to provide services and investment in the real economy. The parasitic self-serving 'business and financial services' sector provides an example of the waste of resources under capitalism. Some of the best technical brains are hired by these firms, for example at graduate recruitment fairs. However their talents are often wasted as they are directed towards projects and activities that maximise profits rather than serve the needs of society.