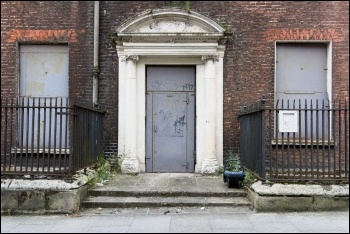 Empty homes should be put to use, photo by William Muprhy/CC   (Click to enlarge)

Mick Barry, Socialist Party Ireland member and Solidarity TD (MP), said: "Inspired by the successful campaigns for marriage equality, repeal of the anti-abortion laws and abortion rights, young people from the 'locked-out generation' are turning their attention to housing.

"The Socialist Party and Solidarity demand 100,000 units of public housing are built over the next five years, and will strive to build a strong socialist left to challenge the rule of the capitalist market at the root of this crisis." See the full version of Mick Barry's comments at socialistworld.net