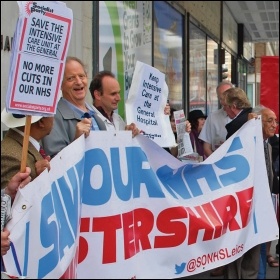 Protesting against hospital cuts in Leicestershire, photo by Tom Barker   (Click to enlarge)

Ninety people gathered for a public meeting on Saturday called by Save Our NHS Leicestershire to oppose plans to remove, without consultation, intensive care beds from Leicester general hospital.

The removal of the beds will be the first step towards downgrading the hospital. Local NHS bosses deny this, even though their Sustainability and Transformation Plan clearly lays out the 'need' to move from three to two acute hospitals in Leicester in the near future.

The meeting was united in demanding a full public consultation. The NHS has suffered cuts over many years, but the trust claims its proposals are not to do with a reduction in services.

If true, let them prove it in a full discussion with the public in a clear and transparent consultation.