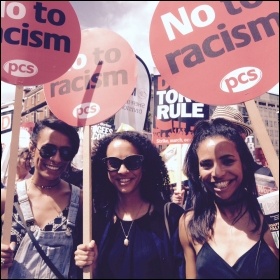 It is now over 50 years since the Race Relations Act was passed in 1967. However, racism has not been ended in Britain - far from it. But smashing racism is what we fight for.

The years of austerity and decades of neoliberal policies of cuts and privatisation, pursued by both Tory-led and Blairite New Labour governments, have resulted in a housing crisis, low pay, zero-hour contracts and crumbling public services.

They have meant a devastating decrease in living standards for most working class and middle class people. Black and Asian people are at the sharp end of this too.

The situation for refugees is getting worse and anti-Muslim prejudice continues to be whipped up.

The Windrush scandal and the Tories' 'hostile environment' policy toward migrant workers expose how the Tories represent the capitalist system - which is intrinsically unequal and racist. The richest 10% of households own almost half the country's wealth while the poorest half of families own only 9%!

The Grenfell tower disaster is a sharp reminder that austerity and capitalism sacrifice the lives of working class people in the drive to maximise profit.

Fundamentally, the capitalist system uses division on all levels to try and prevent a common struggle by the working class against the exploitation of this profit-driven system.

The false claims of antisemitism against Jeremy Corbyn are another attempt to prevent an anti-austerity government coming to power.

The Socialist Party agrees with US black revolutionary Malcolm X that you can't have capitalism without racism.

That's why we need to build united working class struggle against discrimination and oppression. But this must also be tied to the fight for a socialist alternative to provide jobs, homes, higher pay and services for all.

We live in a society where pro-capitalist politicians act in the interests of the richest, defending a system of gross inequality whose symptoms include hungry kids, homelessness and NHS crises.

Trump's election, right-wing populist gains in Europe and the Brexit vote fuel fears that the far right is on the rise. The dangers are real enough.

However, we have also seen the monster demonstration, of over 250,000 people, against Trump when he visited Britain as people sought to actively oppose the racism and misogyny that he represents. This dwarfs the FLA demonstration.

Their attempt to rebuild a far right street movement raises the need for a serious debate throughout the labour movement about the role trade unions and working class communities can play in building a movement for jobs, homes and services - not racism.

The Socialist Party has successfully campaigned for a strategy of mobilising local communities and trade unions, with effective stewarding to keep people safe in order to counter organisations of the far right. It cannot be left to the police to protect demonstrators.

The police have been used to kettle, snatch, beat and intimidate student and anti-racist demonstrators.

Crucially, we call for the building of an anti-racist workers' movement that fights for jobs, for council homes, for pay, benefits and decent public services.

For example, in the 2017 Barts hospitals strike of cleaners and porters in east London, Socialist Party members played a leading role in uniting migrant workers alongside British workers in a militant trade union action against privateer employer Serco.

The far right can be defeated by a mass campaign. It is essential that a workers', anti-racist, anti-austerity movement is built, and that trade unions and Jeremy Corbyn do all they can to lead that.

Waltham Forest Socialist Party: The role of trade unions in the fight against racism in Britain