Workers in UK do £1.2trn of unpaid housework and care each year 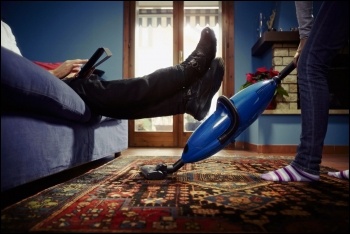 Exhausted and exploited workers are doing an increasing amount of unpaid household work.

The amount of unpaid domestic labour has grown every year from 2005 to 2016, according to the Office for National Statistics. It equates to about £18,932 per person on average - £1.24 trillion a year, almost half the UK economy's annual product!

This shows the incredible scale of the reliance of the bosses on workers' unpaid labour in order to maintain the workforce.

This labour is essential to sustain society as the bosses strip away the social safety net and increasingly place the burden on the individual.

Women, who are more likely to be trapped in low-paid work, are also having to spend more and more time caring for children and adults.

Capitalism's inherent sexism means we still do the majority of unpaid domestic work. Men do 16 hours a week on average, compared to women's 26 hours.

The Socialist Party fights for free childcare for workers for a start, as well as reversing all cuts to health and social care.

That would lessen some of this burden and enable many women to achieve their ambitions.

I was the carer of my partner up until his death. It took a huge toll on my mental health trying to juggle caring for him, looking after our child, doing the housework, managing my mental health, and managing finances.

I asked for support and was told there wasn't a care package social services could put in place for us as, in their words, I was "coping well." I wasn't, and needed support.

The isolation that doing all this work caused was significant as I felt I couldn't leave him. If I could even have got some respite care for him, that would have had a huge impact on my energy levels and my ability to look after myself and my family. But this was denied to me.

How many others have been denied the vital care and support they need? We fight for socialism so that everyone who needs support gets it.

Austerity has forced us to become increasingly self-reliant - at the expense of social interaction and support. It is clear that as services are drastically cut, workers are doing this ourselves - without any extra time or money.

As well as fighting the cuts which force more of these tasks on us, the Socialist Party fights for a shorter working week and higher pay.

Then workers could have free and healthy relationships with our families, without exhausting ourselves to support the billionaire bosses.