Link to this page: https://www.socialistparty.org.uk/articles/28096 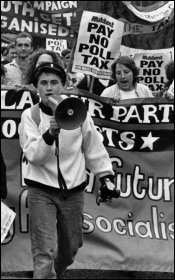 Owen Jones is correct (Guardian 11 October), as were Gordon Brown and John Major, to warn of a poll tax-type revolt over Universal Credit.

He is also right to point out that it was the All-Britain Anti-Poll Tax Federation, set up by Militant, now the Socialist Party, and the mass movement of non-payment, together with the issue of Europe, which brought down Margaret Thatcher.

This movement was not organised by the witch-hunting Labour Party leadership of Neil Kinnock, nor unfortunately the trade union leaders, nor even the Labour left.

It was Militant that pioneered the tactic of non-payment which led to 18 million people refusing to pay the poll tax and finishing it off.

Terry Fields, the Labour MP for Liverpool Broad Green, went to jail for refusing to pay the poll tax and Dave Nellist MP was expelled by Labour for doing so.

Hundreds of others were imprisoned for their defiance, including at least 34 supporters of Militant.

But to expect the Momentum leadership to lead such a movement against Universal Credit is fanciful in the light of their many political retreats, for instance on mandatory reselection.

It would be a welcome political somersault if Momentum were to join with us and others in leading such a movement but it must also combine with the fight against all cuts. In particular, Labour councils must pursue legal 'no-cuts' needs budgets.

To help with this, the Socialist Party should be allowed to join Labour - with the same rights as the Co-operative Party, for instance - in a new, democratic socialist federation.

Such an 'extra-parliamentary movement', combined with action in parliament, could force a general election and defeat May and the Tories.

This version of this article was first posted on the Socialist Party website on 12 October 2018 and may vary slightly from the version subsequently printed in The Socialist.