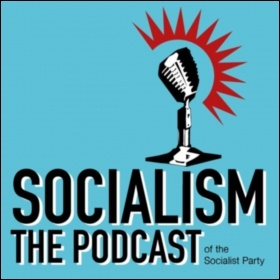 The Socialist Party has launched a podcast! The first three episodes of 'Socialism' are out now, with a new episode to be released every Monday. Each week we'll be interviewing leading members of the Socialist Party and the Committee for a Workers' International about Marxist theory, current events and historical struggles.

In the aftermath of the 2007-8 economic crisis, the capitalist system has been exposed and workers and young people are looking for an alternative. Poll after poll has shown that socialism is now more popular than capitalism.

The surge in support of Jeremy Corbyn's anti-austerity stand here has been mirrored by huge support for Bernie Sanders' 'democratic socialism' in the US, and similar developments in Spain, Portugal, Greece, Brazil, France and many other countries.

These initiatives represent a desire to break with the neoliberal consensus. But there is also a growing understanding that to change the world, we need more than anger and determination. We need a clear idea of the type of society we want to build and what type of movement can get us there - including preparing for capitalism and its political representatives to use their full force to resist such a movement.

In this process, Marxist ideas offer a way forward. From Corbynism, to the NHS, to workers' strike action, to liberation struggles - the Socialist Party wants to encourage and contribute to current debates and discussion in the movement. We hope that 'Socialism' will be an important part of that.