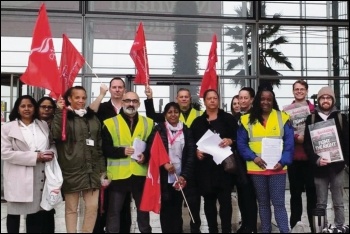 Workers for Newham's Labour-led council who are responsible for processing payments to suppliers are hacked off at bosses for grading their important jobs in a way that gets them less pay.

All seven 'payables officers' held a protest outside the east London borough's office, Building 1000, on 15 October.

General union Unite has balloted the entire team for industrial action. If their reasonable demands aren't met, they're going to strike on 26 and 29 October, and 2 and 5 November.

Unite regional officer Onay Kasab said: "Our members have four days of strike action planned and this could mean that suppliers of goods and services to the council won't be paid on time - the process will grind to a snail's pace.

"We are calling for the council to do the right thing and revert to the agreed process for this particular job evaluation. If the council gets away with not paying this group of staff what they are rightly owed, council management will feel able to get away with it with other sections of the workforce."