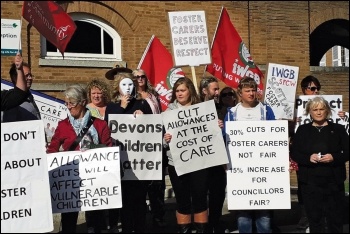 If austerity is over, no-one told the Tory councillors of Devon County Council. Foster carers are to have their allowances cut by 30%. Already they have no rights and live a precarious existence with no guarantee of income. Many are single parents having to meet rent and mortgage commitments.

The reductions will be made after so-called 'consultations'. This practice is sham democracy. The council says the policy will be "fairer and more equitable", attracting more foster carers.

The underlying truth is that the Tories have an agenda of moving all services to private provision. Recently one such private fostering company was sold for £100 million! Fostering children is now about profit for some.

Devon foster carers are fighting back - many have joined the Foster Care Workers Union which is a branch of the IWGB union.

At a recent council meeting, councillors were subject to a barrage of noise and speeches - "no ifs, no buts, no foster care cuts!" - as Henry Lopez, IWGB president travelled from London along with Sandra Anderson, organiser of the Foster Carer's Union to give no-nonsense speeches about the callous way foster carers are being treated.

Foster carers may be seen as a soft target but not when they are organised. Exeter Trade Union Council brought support along with several branches of Unite Community and Exeter Socialist Party.