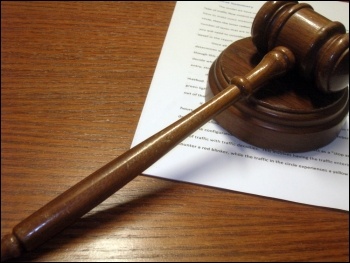 Top judges now get nearly a quarter of a million a year, photo Brian Turner (Creative Commons)   (Click to enlarge)

Civil servants providing administrative support in court will be astounded by this. Their union, PCS, has rightly pointed out the contrast between already very well-paid judges getting a massive pay rise while most workers' pay is falling in real terms.

Money could be better used to end swingeing austerity cuts to the court service. The applications that I file at court as a solicitor are regularly delayed and mistakenly rejected, sometimes repeatedly, because there are not enough trained staff to deal with the administrative workload. This adds to my clients' costs as I have to do the work of putting things right.

My experience is shared by other lawyers who take cases to court. A judge once apologised to me after I had to unnecessarily cross London and appear before him due to a basic mistake. He said that his court's staffing has been halved since 2010, so this happens frequently.

Because of the removal of legal aid from most cases, the meltdown is made worse by the need for staff and judges to deal with a surge of claimants and defendants who can't afford lawyers. The system, especially the family court, gets clogged up by litigants trying to run their own cases and negotiate complicated procedural rules.

If the court service were properly funded, with enough trained staff on decent pay, the system's running would be much smoother to everyone's benefit. It's recruiting, paying and retaining these workers that matters.

As a socialist lawyer, I would also like more judges - but I want them to be lawyers who have worked at the sharp end of the law, not the ruling-class milieu that most judges are drawn from now. Then we could get both value for money and a better quality of justice.

Bail hostel worker: "We haven't had a pay rise in ten years"

"I can't tell you how angry I feel about the proposed pay rise for judges. I work in the criminal justice system in a hostel for ex-prisoners, convicted of violent and sexual crimes including murder and rape. We haven't had a pay rise in ten years. I've also had to take on additional responsibilities while my role has been downgraded. I get £10.30 an hour. We deserve a decent pay rise. What's good enough for the judges is good enough for us."