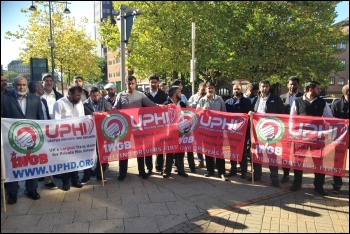 The IWGB union organised the two-hour strike, along with a 'digital picket line' encouraging customers not to use Uber for the duration. Drivers demand an increase in fares and a cut in 'commission' payable to the company.

Over 30 strikers gathered outside the company's Broad Street office in Birmingham to protest over a range of grievances against the multinational gig-economy giant. Pickets were angry and described appalling working conditions at Uber.

I spoke to two of them, Mohammed and Ahmed, who explained what prompted the strike. "The number-one issue is Uber deactivating drivers' accounts. They show us no respect at all. We are on less than the minimum wage."

It seems that Uber operates a one-sided system where the bosses can unilaterally deactivate a driver's account, without any recourse, based on passengers' allegations alone.