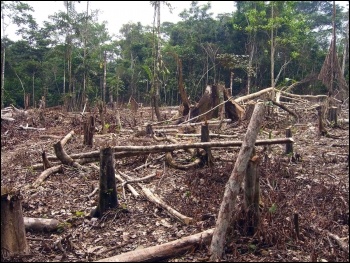 On the day the UN released its special report on global warming, showing we now only have until 2030 to halt climate change, the biggest winner in the first round of the Brazilian presidential election was far-right candidate Jair Bolsonaro.

He, like right-populist US president Trump, is a climate change denier, and plans to withdraw Brazil from the UN's already insufficient Paris climate accord. Alarmingly, he also intends to allow more deforestation of the Amazon rainforest for profit. The loss of further trees from the Amazon will affect everyone on Earth.

Forests play a crucial role in maintaining global carbon dioxide levels, the rise of which is a major cause of climate change. Worldwide, trees suck up 2.4 billion metric tons of carbon each year, with the massive Amazon absorbing a quarter of that total.

The Amazon also emits 20% of the world's oxygen. Recent research suggests it is the 'beating heart of the Earth', as millions of trees work together as a kind of 'biotic pump' releasing water vapour into the air. This process creates 'flying rivers' in the atmosphere that circulate water and weather patterns around the planet.

But the Amazon is losing its ability to soak up carbon dioxide, emit oxygen, and play its crucial role in water circulation and weather. Deforestation and higher temperatures from global warming have resulted in trees dying at an increasing rate.

Cattle ranching accounts for about 70% of Amazon deforestation. Trees burnt for fuel release their captured carbon dioxide, and the metabolic activity of cattle also releases it.

The UN report says the planet will reach the crucial threshold of 1.5°C above pre-industrial levels by as early as 2030, risking extreme drought, wildfires, floods and food shortages for hundreds of millions of people. It urges governments to make "rapid, far-reaching and unprecedented changes in all aspects of society."

But as shown by Trump in the US and Bolsonaro in Brazil, the capitalists only want to further their own national interests and personal profits. Climate change is therefore a political issue that can only be mitigated by socialist international solidarity and economic planning. Workers around the world can unite to revolutionise energy production by taking over the energy giants and big corporations and forcing a switch to renewable, green energy.

I am writing to express my anger and that of my estate-wide neighbours. We are currently subject to an infestation of rats on our estate.

The rats are in blocks of terraced houses and down alleyways. These rats venture into kitchens and gardens with impunity.

The Wokingham Borough Council environmental health department has said it is up to individual residents to pay for pest control workers to come and deal with each property's complaint. This is ludicrous and extremely dismissive from the council.

This estate is council-owned land, and therefore we believe the council should be paying for the widely reported rat problem within. It is a futile exercise to pay individually for pest control as it will not eradicate the problem.

Alongside this, how many people on this estate do you realistically believe can afford £80-plus for pest control to just come and have a look for the rats, and then pay for further treatment on top? This is a highly impoverished area. We are the forgotten of Wokingham.

This is disgusting and such a disgraceful attitude to have towards your tenants. We feel as though the council considers this estate to be the back passage of this town - however, sometimes a rear end needs a wipe!

We may live in the back end of the borough, but we are not excrement! We deserve respect and we should be allowed to live with some dignity.

We pay council tax to Wokingham Borough Council, yet we get ignored, our services cut, and told to live in a rats' nest on a condemned estate.

We will be left here to rot for a number of years before any progress is made with development! And it is common with developments, like the plans for Gorse Ride South, that the habitats of local wildlife such as mice and rats will be disturbed and the problem will escalate further.

There will be a meeting held on 29 October at 2pm in St Mary and St John's Parish Hall, Vicarage Close, off Billing Avenue, Gorse Ride South Estate. At this meeting we will be discussing the following: rat infestation and how we want it handled, cutting of our bimonthly large items removal truck, and the fly-tipping that has been caused by this, removal of garden waste bags and collection of them, maintenance and appearance of the estate and its alleyways, and the council's environmental health and housing departments needing to work together to solve the infestation and service issues.

Stephen Barclay, a health minister, announced a "fit and proper person test" following Mid Staffordshire's care scandal report. It could result in NHS directors being sacked if they fail to confront bullying.

This will strike many NHS workers as the ultimate hypocrisy while an eight-year-long Tory assault on the health service rages on, entrenching the conditions which result in bullying. As many as 25% of workers report abuse from other staff.

Insecure contracts, poor pay, improper management, excessive workloads, transfer of staff to subsidiary companies, and competition from privatisation are all sources of tension among staff.

Migrant and ethnic minority workers are among the foremost victims of bullying and discrimination. Outrageously, as many as 15% of minority ethnic staff report bullying from colleagues and managers.

Bandage-like solutions to the open wound of bullying and discrimination include proposals to appoint workforce "learning and culture ambassadors," the latest non-measure to fail to heal divisions.

Trade unionists know the best remedy to management misconduct is active and strong organisation among workers. Where unions thrive there's cooperation and harmony among workers. Even in periods of adversity, leadership can hold to account managers who fail - without the 'aid' of trendy, top-down, useless exercises to salve top bosses' consciences.

All's not lost, however. Across Britain there are examples of a workforce resisting in the health service. From victorious industrial action to prevent outsourcing to subsidiaries, which resulted in the national pause of their implementation, to a revolt among staff in NHS Highlands to end a culture of bullying in that trust, to workers joining service users to prevent cuts and closures as in the amazing triumph in Mansfield where the Socialist Party played a leading role.

The editors of the Daily Torygraph recently put the heading "All say 'aaah'" to three letters they received.

A reader in Lancashire wrote: "It has been suggested that up to 15 people should see a GP at the same time. What next? Perhaps we could have conference telephone calls for the Samaritans."

From Kent: "Sir, I am proud to have trained as a state-registered nurse, and even prouder of my husband, who has just retired as a GP after 33 years. We were both horrified to read of this scheme.

"Confidentiality is key in a medical consultation. Many people arrive with one set of symptoms in mind but go on to talk about something else, such as mental health issues, as well as other symptoms they had not felt relevant, or deeply personal complaints that they would never raise in a group situation.

"People tell GPs things that they would not tell their parents or partners. Are we seriously considering the end of holistic medicine and continuity of care in the most effective and precious area of the NHS?"

Then a doctor from south London probably best sums up the scorn for May's governance of the NHS: "Might I suggest that, in view of recurring crisis due to the shortage of NHS hospital beds, plans should also be considered for these to be shared?"

It is not surprising that, also in the Telegraph, in a featured article, Lord Archer - the closest of allies of Thatcher - said "our party is in a mess," and after a recent visit travelling through the north of England, "I'd vote for Corbyn if I lived up there."

What a confirmation of the editorial in the last issue of the Socialist on the "Tories' crisis conference," that "enormous anger exists in society. There is huge hunger for an alternative."

A couple of us attended a local Green Party meeting in Malvern, Worcestershire, where Green MP Caroline Lucas was speaking, as it was open to the public.

We sold four copies of the Socialist, and both a written and oral question of mine were taken. It was very good that page 3 of the Socialist had an article on climate change!

Generally we agreed with what Caroline Lucas said, and she is a good speaker. But I found that although she could say what is wrong with society today, she didn't seem to have any answers apart from calling for 'proportional representation' - electoral reform so the Green Party could potentially get some more MPs.

Her position supporting remaining in the neoliberal EU is obviously different to ours. Although she said the EU's Common Agricultural Policy wasn't working well, and that the Agriculture Bill currently up before parliament would give us the opportunity to be more environmentally friendly, so a bit of confusion there!

She also mentioned the 'political will' to change things needed to be there, but there was no indication as to what that might involve.

She mentioned there should be a redistribution of wealth - with something like a pay differential of 1:10 in workplaces - but what is her plan for this to be achieved?

A number of the points she raised which were supposed to reduce environmental damage would put the cost onto workers, not onto those who can and should be made to pay - the capitalists. There was also no mention made during the whole meeting of the major corporations that operate here and internationally who really decide what happens - so need to be owned and controlled by the working class.