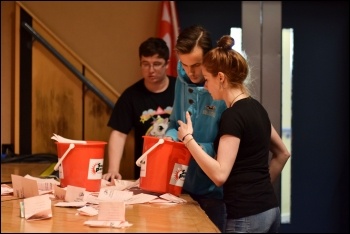 We are asking all our members and supporters to donate to the Socialism 2018 finance appeal. We set ourselves a target last year of £30,000, which was surpassed with a record collection of £42,000. We have to ensure that we can maintain or improve our finances going into 2019 and this appeal is crucial to that.

The Tories are tearing themselves apart over Brexit but their programme of attacks on the NHS and on working-class living standards, jobs and services continues. They are determined to maintain the roll-out of Universal Credit, further hitting the living standards of the poorest.

However, despite the weakness of May's government, the trade union and Labour leaders are doing little to push the Tories from power.

The Labour Party continues to be 'two parties in one' and we continue to fight for a determined campaign to kick the Blairites out of the party before a possible general election. They remain as a capitalist fifth column, preparing to sabotage a Corbyn government in the future.

Nothing exemplifies this more than Labour's position on council cuts. Instead of refusing to implement the cuts, as we have argued, right-wing Labour councillors continue to do the Tories' dirty work: sacking workers, attacking trade union rights and selling off council assets and land to spiv property developers.

By contrast, the Socialist Party stands alongside all those groups of workers who have been forced to take action, many for the first time, such as Uber drivers and the Glasgow and Birmingham care workers.

We consistently put forward a programme to fight the cuts, transform the Labour Party and bring down the Tory government. Our arguments have been taken up by those inside and outside the party who want to see a fightback.

At the same time, we raise that lasting change can only be achieved through a socialist alternative.

Capitalism, based on private greed, is a system in crisis and is out of control. The rich continue to get richer - incredibly, eight super-rich individuals have now accrued more wealth than over half the world's population.

Whereas they could not spend that money in a million lifetimes, those resources alone could be used to begin to establish the basis for a decent life for all of us, for the 99%.

Can you give £5, £50 or £500? Can you ask other members and supporters to donate? Every donation, no matter how small, will make a difference and all of it will go to building support for socialist ideas.