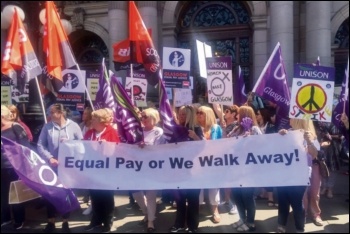 Over 8,000 low-paid Glasgow council workers - organised in Unison and the GMB unions - made history on 23 and 24 October by striking for equal pay. It was the biggest strike for equal pay since the heroic struggle of the Ford Dagenham workers brought about the 1970 Equal Pay Act.

In a show of industrial power, strikers shut down schools and council services across the city. The morning picket lines were solid and there was a huge turnout of trade unionists across the city on a lunchtime solidarity march and rally.

The strikers are supported by their families, those they serve and care for, and the working class across Glasgow, Scotland and beyond. Socialist Party Scotland - which stands for the building of a mass working class party that fights all cuts - offers its 100% solidarity and support.

The strikers have served notice to this divisive Scottish National Party-run council that if it does not meet the demands of the trade unions after the two day strike, then Unison and GMB are completely justified in organising further strike action.

The council needs to understand that only by giving 13,000 workers and retired claimants what they have been owed for 12 years in wages and pensions, and by committing to a equality-proof job evaluation and pay grading scheme from now on, will this dispute end.