College lecturers in Wales have voted by an overwhelming majority to strike, busting the undemocratic Tory strike threshold. The employers, Colegau Cymru, refuse to recognise the all-Wales ballot. They demand the union divide up the dispute college by college, despite Colegau Cymru negotiating for all colleges collectively. 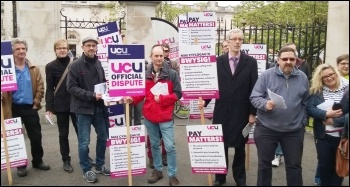 We've witnessed ten years of barbaric educational vandalism by the Tories. 91% of University and College Union (UCU) members voted for an improved pay offer on a 52% turnout. 54% voted in the workload ballot, 90% backing strike action.

Intensifying workload, job cuts, and a decade of real-terms pay reductions (approximately 20%) are lowering staff morale. Some of our members even seek charity support as they face financial difficulties.

The Education Support Partnership claimed requests for grants were up 40%. Our 7.5% pay claim goes some way to recompensing these losses.

A UCU Wales survey showed members are working 50, 60 and 70-hour weeks, but getting paid for 37. Lecturers are literally working two days for free.