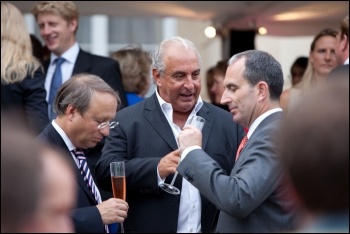 Billionaire retail boss Philip Green (centre) has been accused of racism and sexism towards his workers, photo Financial Times/CC   (Click to enlarge)

As well as gagging orders and pay-offs, Green shelled out more than £700,000 obtaining a legal injunction designed to keep the story out of the media. The wall of silence was ended when the issue was raised by Labour peer Peter Hain in the House of Lords, who used parliamentary privilege in order to avoid falling foul of the legal injunction.

Green's response to the allegations hitting the headlines - including crassly brushing off his alleged behaviour as 'banter' - has only added weight to the claims of his accusers.

Revoltingly, in an interview published on 28 September, he supposedly rebuts accusations that he made disgusting racist comments aimed at the Filipino workers who staff his $150 million superyacht by saying: "My family's longest-serving Filipino employee has been with us 28 years."

It is no surprise to learn that Green is accused of bullying. Being prepared to trample on the lives of others is a prerequisite for making billions of pounds based on a business model relying on rock bottom wages, casual contracts and asset stripping.

Women and those from ethnic minorities are disproportionately likely to face low pay and work in casualised settings.

To believe that Green also holds bigoted attitudes towards many of those he relies on to generate profit takes no great leap of the imagination.

Tory and Blairite politicians are now either joining the chorus of condemnation against Green, or else are staying silent. But they've substantially changed their tune.

Back in 2010, David Cameron invited Philip Green to advise his government on 'efficiency' - the choice Tory euphemism for cuts.

Green made his fortune on the basis of buying ailing businesses at knock-down rates. His astonishing ability to cut 'costs' - otherwise known as jobs, wages, pensions and conditions - was cited as his principle qualification for this appointment.

The Con-Dems took Green on as an adviser at a time when his business portfolio included the retailer BHS. This company was effectively stripped of assets by Green before it was forced to close. Its workers were left high and dry. They not only lost their jobs, but found that he had left behind a gaping hole in the pension fund.

Green extracted hundreds of millions of pounds from the company. At the same time, it's estimated he avoided more than £160 million in UK tax. His wife - the legal owner of Green's Arcadia group - continues to officially reside in tax-haven Monaco.

And it's not just the Tories who've been chummy with Green. Tony Blair was among those who recommended he be knighted in 2006.

Green is not a just 'one rotten apple'. He is deeply enmeshed in the capitalist establishment.

And sexism and racism are part and parcel of the capitalist system - as scandals, including those revealed under the banner of #MeToo, are increasingly exposing.

Stripping Green of his knighthood, as many pro-capitalist politicians are now demanding, barely scratches the surface. He should face investigation, overseen by workers' representatives and trade unions, over all allegations of sexist and racist abuse, as well as on the huge payments made to try and silence accusations.

What's more, we demand the opening of the company's finances to full inspection by trade unions and the public. Regardless of his alleged personal conduct, Green's role in the collapse of BHS itself justifies the nationalisation of Green's 'assets', in the form of the giant Arcadia group.

This should be brought into public ownership, under democratic workers' control - with compensation paid to shareholders only on the basis of proven need. Only this measure would be sufficient to guarantee the protection of jobs and pensions for all the 22,000 workers it employs.