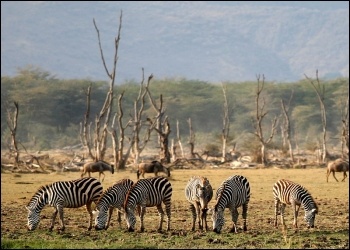 Since 1970, 60% of mammals, birds, fish and reptiles have been wiped out due to deforestation, farming techniques and other human activity.

A report by leading scientists and the World Wildlife Fund warns that the annihilation of wildlife is now an emergency that threatens civilisation.

The news follows warnings that even limiting global warming to the current target of 2°C is not enough. Scientists are now insisting on the lower limit of 1.5°C - and saying we have just 12 years left to change course.

Unprecedented change is required if we want to have a planet to live on, cities and towns to live in, food to eat, water to drink and to secure the survival of wildlife and ecosystems which are vital to human life.

Only on the basis of a socialist world - where the planet's resources are taken out of the hands of those driving climate change, the capitalists, and into collective ownership, as part of a democratic plan for green production - can we truly meet the needs of all society, and avert catastrophe.