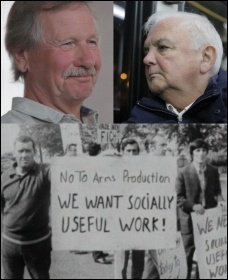 Lucas Plan workers and developers then and now   (Click to enlarge)

'The plan that came from the bottom up' is a new film about the 'Lucas Plan', developed by shop stewards at Lucas Aerospace in the Midlands in 1976, to make socially useful products rather than armaments used to kill people.

As the film makes clear, this wasn't the normal result of booms and slumps - which bring periodic unemployment. This was 'structural unemployment'.

From the beginning, it is clear that it was the normal thing to do at the time - in the face of threats to jobs - for the workers of various industries to ask for nationalisation.

It includes footage from the 'work-in' at the Upper Clyde Shipbuilders in 1971, and from strikes and occupations across the whole of the manufacturing sector, many of which have been forgotten in time.

Former Labour MP Dave Nellist, who features in the film, says: "In one scene about the shipbuilders' occupation a worker says 'economics shouldn't control men, men should control economics'. That's what the Lucas Shop Stewards Combine tried to do.

"Instead of submitting to redundancies, or to a continual deskilling and fragmentation of their work, they tried to take control of how they worked, what they designed and what they built. To take over that power of management's 'right' to manage".

As one of the workers said in a question and answer session afterwards: "We wanted workers to have as much power as shareholders".

But Dave Nellist comments: "Unfortunately, that was the problem. Shareholders collectively own a company, and can therefore set its direction. The workers at Lucas never collectively owned their company - for that it would have had to be nationalised."