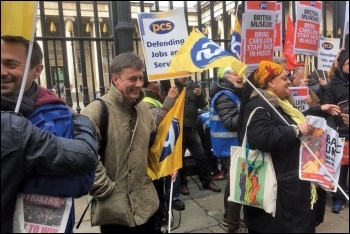 Chris Baugh with protesters outside the British Museum, 20.3.18   (Click to enlarge)

Voting is due to take place in civil service union PCS's broad left grouping, Left Unity, to decide candidates for positions including assistant general secretary (AGS) of the union.

Socialist Party member and incumbent Chris Baugh is fighting to retain the position against a challenge to member-led, militant trade unionism.

The Socialist spoke to PCS members attending the recent Socialism 2018 event about why they're backing Chris, all in a personal capacity.

"I'm backing Chris because I can see an emergent threat in the union, where we want this union to be member-led, but at the moment it looks as though the union's moving towards control by unelected full-timers.

"It looks as though some of the most ardent and best fighters over the years are being excluded. So I think we need to win this for the rank-and-file worker in the union."

"The reason I'm backing Chris is because I want to see a more democratic union - a union that actually considers the members and puts the members first, rather than just top-down. I want plenty of discussion about how we take things forward."

"I'm backing Chris because since 2004 he's done a superb job as our AGS. He's showed himself to be fully electable, elected three times.

"He's done absolutely nothing wrong in that role, and I think it was a massive mistake for Janice Godrich to stand against him and split the left."

"I'm backing Chris because not only is he the best candidate, but this is the principle of democracy here. What right has Mark Serwotka to tell PCS Left Unity who its nomination should be for AGS candidate?

"I'm supporting Chris Baugh to be the PCS Left Unity candidate for AGS because of his brilliant record fighting for PCS members.

"There is a lot at stake for our union now, and we need to ensure that PCS can stand as a democratic, fighting union - despite the divisive moves of others which have split the left."

"Chris Baugh represents one of the finest full-time officials within the PCS. His record speaks for itself.

"He's spent 40 years battling the right wing within the civil service unions. He's established his position as an outstanding officer, completely basing himself on the aspirations and the wishes of the rank and file.

"It beggars belief that he should be challenged at this stage by someone who's been a member of Left Unity and the Socialist Party.

"I can only assume it's the doing of the general secretary of the PCS, who unfortunately regards Chris as somewhat of a nuisance.

"The nuisance being a man who continually raises the issues with the leadership of what is in the best interests of the rank and file.

"He's got my total support, and I believe with the kind of support he enjoys, he'll emerge victorious."

"Chris has been absolutely, fervently backing devolution for Wales, supporting reps, and developing the strategy and the industrial demands to take on Welsh government. But also to build the union in Wales - where we already have a Labour government.

"That is an ongoing campaign. We haven't necessarily had the support within the structures in Wales to take that forward.

"But Chris has pursued that and made sure it continues to be on the agenda of the union.

"Now we're taking strides in Wales to make sure the Wales committee is leading that fightback, with the support of Chris."