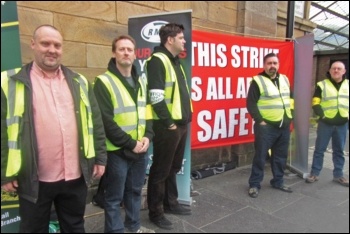 It was standing room only as around 80 people attended a packed meeting in Leeds organised by the RMT transport union in support of the long-running dispute to maintain the safety-critical role of the guard on Arriva Rail North services.

RMT general secretary Mick Cash opened the meeting saying the union will take whatever action is necessary to win this dispute with strike dates planned until the end of the year.

He highlighted the way the government is backing the employers in the dispute with the Department for Transport covering Arriva's losses from strike action.

But he also demanded firmer support from Labour councillors who make up 'Transport for the North' which had co-sponsored the current contract for rail services.

This includes a clause committing to 50% driver-only operation on services. The RMT has approached both Transport for the North and Arriva to jointly seek the removal of this clause as a step towards settling the dispute.

Leeds East MP Richard Burgon gave a fiery speech where he reiterated not just Labour's pledge to renationalise the railways and end driver-only operation proposals, but also raised the need for much wider nationalisation proposals.

Joanne Thomas, Yorkshire and Humber Trade Union Council chair and Usdaw divisional officer, spoke about how employers in many sectors, including retail, are trying to cut back on safety measures to boost profits.

Two local Labour councillors spoke in support of the dispute. One, from Wakefield council, asked to work more closely with the RMT to challenge those Labour councillors on Transport for the North who are reluctant to support the union.

There was a lively discussion from the floor about how further support could be built. The mobilisations by Leeds Trade Union Council to the picket lines and the 'public ballot' activity on 5 November - both initiated by local Socialist Party members - were given praise.

The meeting was closed by local RMT branch secretary John Stewart reminding those present that guards weren't striking for a pay rise but to preserve rail safety.