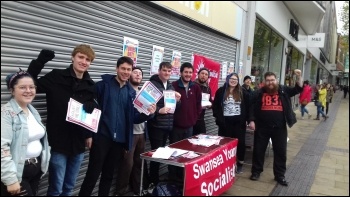 Student activists from universities in Swansea, Aberystwyth and Cardiff gathered in Swansea on 3 November for a all-Wales Socialist Students meeting.

We started the day with a campaign stall in the city centre, calling for an end to Universal Credit and demanding a general election to kick out the Tories.

This was followed by a meeting held at Swansea University which kicked off with Socialist Students national chair Theo Sharieff speaking.

Over the course of the afternoon we discussed the current political landscape: Brexit and the call for a general election, as well as reports from each local society on their experiences on campus, of meetings and on protest activity.

The meeting also came the day after I was elected as a delegate to the National Union of Students national conference on our socialist platform, a step forward for Socialist Students' work in Wales.

It was agreed that societies in Wales would endeavour to work together more closely when possible and that we should meet again to discuss continuing to build the student movement and the reach of our ideas.