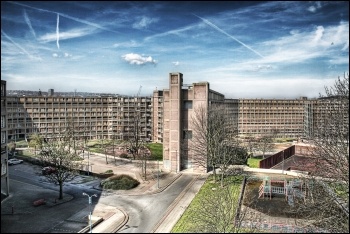 A United Nations special envoy has published a report that harshly condemns poverty in the UK, and links the capitalist establishment's brutal austerity programme to it directly.

After two weeks of speaking to impoverished people, government ministers and community groups, Professor Philip Alston has produced a report that is essentially one attack after another on the Tories' failures on poverty, on welfare, and much more.

In fact, when he confronted ministers about the severe hardship Universal Credit had caused, they resorted to denying the problems and "blaming political opponents for wanting to sabotage their work"!

His conclusion was clear. The Treasury could have spared workers and the poor, but the government chose tax breaks for the rich instead.

The findings and conclusions won't be a surprise to most of us.

In my hometown, Coventry, rough sleepers can be found throughout the city centre. 100,000 people had received emergency food from one foodbank between 2011 and 2017.

Many have faced years of poverty and hunger and desperation. All because a ruthless Tory government has made a political choice to further enrich the super-wealthy, aided and abetted by the Blairites.

But while the report was damning enough to offend the Tories, its recommendations do not come close to offering the real solutions needed.

The UN may be keen to push for less poverty, not least to try to put off mass social revolt. But as a gathering of capitalist governments, dominated by the major imperialist powers, the UN will not pursue the demands necessary to actually end poverty and guarantee a decent life for the majority.

With over 14 million in the awful conditions the report describes, a clear call from Jeremy Corbyn and the trade union leadership for an immediate general election to end austerity would resonate with a huge portion of the British population.

Austerity and all its cruelty must be brought to an end, along with the capitalist system that demands it. We say only a mobilised working class with bold, socialist leadership can do it.