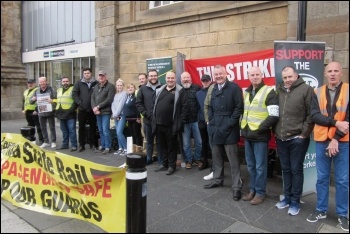 RMT transport union members picketing Manchester Victoria train station on 10 November had an unusual visitor - and it wasn't Santa Claus. It was none other than David Brown, managing director of Arriva Rail North.

Most had never seen him face-to-face before, only on TV or in the company magazine, and certainly never at a picket line. He was respectful, friendly even: "We don't want bad feeling with employees, like some other franchises" he said for example.

After he'd gone, his visit was widely interpreted as a sign that Arriva Rail North are coming under real pressure. The RMT's switch of tactics - from striking mid-week, and regrettably hitting commuters - to striking on Saturdays, is paying off.

The commuter Facebook groups are back on side and businesses are the ones complaining. This was the nineteenth consecutive Saturday of strike action and the first to hit the popular - and extremely profitable - Christmas markets.

Rumour has it that Andy Burnham, Greater Manchester mayor, is jumping up and down complaining that Arriva Rail North hasn't settled this dispute yet. Pity he didn't take the union's side months ago and this dispute might have been settled!