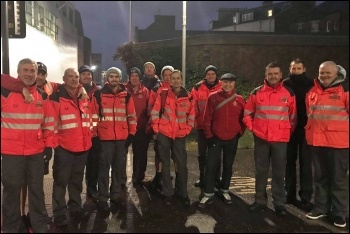 A three-day wildcat strike by 45 postal workers in the Communication Workers Union (CWU) has taken place at Hamilton delivery office in Lanarkshire against management bullying.

The workers walked out and picketed on 15 November and agreed to return to work on 20 November after winning a settlement that satisfied the demands of the members.

A Hamilton postal worker told Socialist Party Scotland at the picket: "Since privatisation, bullying has become endemic. Workers up and down the country are being coerced and harassed into carrying a workload and more overtime that simply isn't possible. I wouldn't tolerate being spoken to the way we [have been by managers] on the street, for example, and we weren't about to take it in the workplace".

Recently there have also been walkouts in Gateshead and Grimsby in the summer. It seems Royal Mail management are not living up to 'the culture of respect' element of the Four Pillars trade union agreement. The CWU should organise an official national strike ballot on the issue.