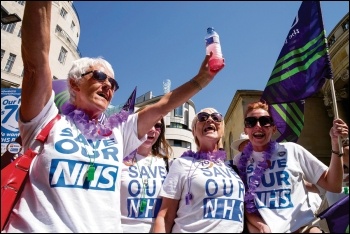 Demonstrating to save our NHS, photo by Paul Mattsson   (Click to enlarge)

Staff shortages in the National Health Service (NHS) could triple in just a decade, according to recent research from major think tanks. Already, the NHS is over 100,000 short staffed. A tripling of this number will see one in every four jobs left empty and potentially spell the end for the NHS within the next ten years.

Although shocking, for workers on the ground this figure is no surprise. Years of vicious cuts under the coalition and Tory governments have decimated our health system. Since 2010, staff have seen a 14% real terms pay cut. Dozens of A&Es have closed and tens of thousands elective operations are cancelled each year.

Working in such a dismally underfunded system is demoralising. We cannot take time off when we want as it leaves the wards even more understaffed. We forgo breaks and work unpaid overtime to keep the system afloat. And perhaps worst of all, we do not have the time or resources to provide the level of care that our patients deserve.

It's no wonder that NHS doctors are leaving for the greener pastures of Australia or New Zealand, where hours are shorter and pay is up to 50% higher. But if the above predictions are true and more staff leave, the vicious circle of working overtime to fill rota gaps will only worsen the situation for those who stay.

As another winter health crisis looms, the future of the NHS, yet again, comes to the political forefront. May's government is on the brink of collapse over Brexit. Now is the time for the trade union leaders, Jeremy Corbyn and the left, both in and outside of Labour, to mobilise working and middle-class people to force a general election and oust this mess of a government.

Only by booting out May and her Tory wrecking crew and implementing socialist policies, can a fully funded, fully staffed and publicly owned NHS be secured.