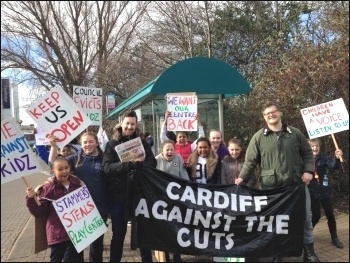 Cardiff's Labour-run council plans to short-change Cardiff schools by another £3.5 million in real terms, as well as slash £19.4 million of funding from services. Council tax will rise by an inflation-busting 4.3%.

Councillors are following up the privatisation of leisure centres by washing their hands of more sports buildings as well as the New Theatre. The propaganda about the community running facilities can't hide the truth that many of these places will close without the resources that comes with public ownership.

Despite their claims to the contrary, Cardiff Council is brutally cutting back funding for schools in the city - and not for the first time. Last year Cardiff's schools lost almost £2 million in real terms.

The council must relieve the pressure in our schools and other services by refusing to make more Tory cuts. They should defy austerity and demand more funding. This weak government wouldn't be able to resist a campaign that won the support of everyone who relies on these services or provides them.

Cardiff is set to be Britain's fastest growing city, thanks in large part to the Welsh government's failure to stop the jobs slaughter in the rest of Wales. 10% of Wales' population lives in the city already. If Cardiff Council made a stand against the cuts it would set a powerful example to other councils in Wales and beyond.

It's simply not true that councillors have no alternative but to pass on the cuts the Tories demand. Collectively, British councils have greater spending powers and assets than some European countries. Cardiff Council for example is sitting on a pile of cash reserves of £76.1 million.

We are all paying for the cowardice of our councillors. According to their own documents, a quarter of a billion pounds of services has been cut in Cardiff in the last ten years by Labour, Liberal and Plaid-run councils. At least 1,600 full-time jobs have gone from a city in desperate need of secure work in the last six years, and 2,500 over the decade.

This cannot go on. If councillors won't fight the cuts of their own volition, we've got to rise up and make them.

Since austerity began, ordinary working-class Cardiff residents have shown time and time again that they are willing to fight. Playcentre campaigners from Grangetown, Splott and elsewhere have blocked the road and invaded county hall to protest at the damage being done to their communities. Over 100 protesters from the Star centre marched in Splott.

Libraries campaigners and many others have taken action all over the city and shown they won't let the services and facilities they care about close without a fight. Lansdowne Primary School fought off not one but two plans to shut their school.

We need campaigns just like those again for our schools and the other facilities targeted this year.

Islwyn Constituency Labour Party recently voted to call on Caerphilly Council to oppose cuts (see Islwyn Labour Party calls for council no-cuts budget) in line with the policy of Wales TUC and the Unite and Unison trade unions. Labour councils should implement no-cuts budgets, using reserves and borrowing powers to make up the shortfall while a campaign is fought to win back funding.

If the existing councillors continue to implement the cuts, then local ward parties should prepare to replace them as Labour candidates for future council elections. But the campaign cannot wait until the 2022 elections.

The campaign to stop the cuts must be built into a mass struggle to force the council to step back.