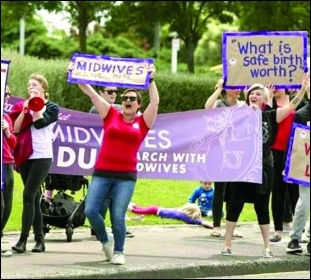 Members of MERAS, the midwives trade union, have been taking two-hour strike action, twice a day, from 22 November to 5 December. 540 strike notices have been issued. This follows a 90% rejection of the DHB's pay offer on a 80% turn-out.

MERAS is fighting for improved salary scales that recognise midwives skills and responsibilities, which will attract and retain staff.

The DHB's own Midwifery Workforce Information Report in September recognised the severe understaffing in maternity units around the country.

This is due to fewer midwives and more babies being born. Workplace stress means midwives have a very high rate of sick leave and turnover of staff. Almost a third of midwives are over 55 and will retire in the next ten years.

MERAS committed to providing Life Preserving Services (LPS emergency cover) during the strikes but the fact that some DHBs have requested more staff for LPS than would normally be rostered, shows both management hypocrisy and the severe staff shortages.

"When there is industrial action in hospitals, DHBs (and in this instance we're talking about maternity units) are expected to have the bare minimum staff working and available to ensure that LPS are maintained...

"However, what's becoming apparent through this industrial action is that the level at which some units are expected to be staffed during the two-hour strikes (the level of LPS), is actually higher than at other times. I find that astounding, and what it suggests - if it doesn't make blatantly clear - is that some maternity units are understaffed the majority of the time.

"A related issue is that if the number of midwives needed to provide LPS simply cannot be found, a strike cannot go ahead...

"Our midwives are stuck between a rock and a hard place. They need to strike to be taken seriously, but often they're not able to precisely because of the very reasons that they need to strike.

"This situation needs to be resolved, and resolved quickly, so that there are always enough midwives to safely staff our maternity units.

"It's not just midwives who deserve this, but those who are pregnant, our babies, whanau (extended families) and the future generations of Aotearoa (Maori name for New Zealand).

"We need midwives. And at the moment, they really need us to stand by them too."