Link to this page: https://www.socialistparty.org.uk/articles/28398 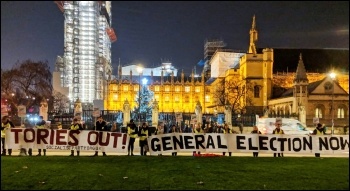 We demand a general election now!

After a day in which Theresa May and the Tories showed they are unable to govern, members of London Socialist Party went to Parliament to demand a general election. 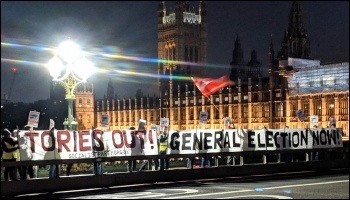 We wore yellow vests in solidarity with the 'gilet jaune' protesters in France.

Others called off their protests (after Theresa May called off the vote on her Brexit deal in parliament) but now is not a time to step back.

Jeremy Corbyn and the trade union leaders should call a massive demonstration - we need a mass movement on the streets, in our workplaces and among young people!