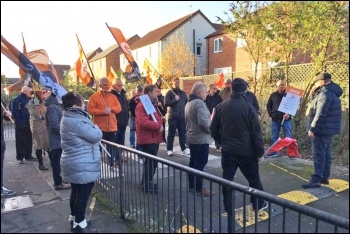 Workers for Kingstown Works Ltd (KWL) in Hull have started a campaign to protect their sick pay scheme with a lobby of Hull North constituency Labour Party (CLP). KWL is the old 'direct works' of Hull City Council, responsible for maintaining the city's housing stock.

It is now a Hull City Council wholly owned company, a step towards privatisation. Hull councillors sit on the management board and, scandalously, support the attack on the workers' conditions.

Deputy leader of the council, Darren Hale, has represented the KWL management on local radio and at times sounded more like a corporate boss justifying the race to the bottom than a Labour councillor. He spoke about the need to make "efficiencies" and implied that the current sick pay scheme was better than what most workers in Hull enjoy. This sort of language is used by the bosses to justify the 'race to the bottom'.

Hale went on to attack the GMB union, claiming that they did not represent the whole workforce. Hale should be ashamed of trying to divide the workforce by playing one union off against another.

BBC interviewer James Piekos reminded Hale that earlier in the year, he had stood on a picket line demanding that FCC (a private company that handles waste recycling in the city) give their workers a decent sick pay scheme. Yet here he was, six months later, attacking his own workforce's sick pay.

The lobby was upbeat with 40 workers taking part. Flags of council unions GMB, Unite and Unison were flying, giving the lie to the idea that it was just the GMB. To its credit, North Hull CLP allowed a speaker into the meeting and gave the workers a big round of applause.

The hope now is that management will back down. But if they don't, the workers are clear that the campaign will escalate.

If KWL management, together with the city council and wider labour movement, were to campaign against the cuts and austerity, they could build a mass campaign for the resources Hull desperately needs.