Members of Unite the Union employed by housing charity Shelter have secured a victory after agreeing an improved pay offer ahead of a strike due to start on 11 December.

Workers accepted an offer of a 4% increase, four times the original 1%.

As a result of the fight and threat of industrial action, Unite the Union have recruited a further 100 members at Shelter. 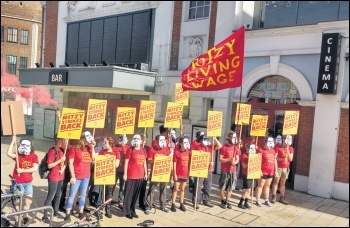 The reps, who have worked at the Ritzy for a number of years, will have to be reinstated in January.

Picturehouse workers, including at the Ritzy, have taken strike action and been campaigning to be paid the official living wage in London, for fair pay rises for supervisors, managers, chefs, sound technicians and projectionists and for company sick pay for all staff. They are also demanding company pay for maternity, paternity and adoption.

Unison members in Camden, north London, working for private company NSL as traffic wardens have walked out again for 14 days until 19 December, after recently taking five days of strike action as part of their fight for decent pay.

They are asking for £11.15 an hour, an amount that Camden Unison argues is very reasonable particularly when the top director at NSL gets over £320 an hour.

For updates about the dispute and to send messages of support, contact unison@camden.gov.uk