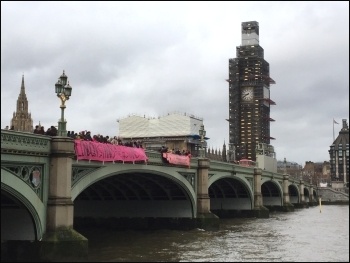 Supporting the Stansted 15, photo by P Mitchell   (Click to enlarge)

The 'Stansted 15', who took non-violent direct action at Stansted airport in March 2017 to prevent the deportation of 60 people who were at risk, have been found guilty of "endangering safety at aerodromes" - a terrorism-related charge. Sentencing will take place in February.

The original charge of "aggravated trespass" was changed after four months to the more serious "endangering safety at aerodromes".

Clearly the intention of this unprecedented verdict is to deter non-violent direct action protests for fear of severe legal consequences. 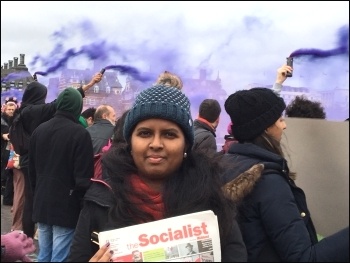 Supporting the Stansted 15, photo by P Mitchell   (Click to enlarge)

Of the 60 deportees, ten are currently pursuing asylum claims in the UK, and at least one has since been granted permission to remain in the UK.

The Socialist Party sends solidarity to the 15.