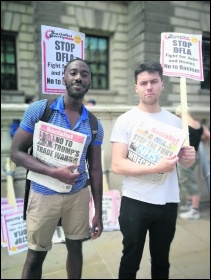 More people came out to oppose the racist, divisive politics of Tommy Robinson than marched behind his banner.

Socialist Party members were at the demo with leaflets and placards calling for jobs, homes and services, no to racism.

We were also saying that the most immediate step needed in the fight against racism is getting rid of the Tories - the party of the Windrush scandal and the hostile environment.

The Tories are literally on the brink. There is enormous anger and fear among very wide layers of the population, not just in relation to Brexit, but as a result of austerity and impoverishment.

It is important to oppose Tommy Robinson's attempts to gather up this raw mood behind a far-right agenda.

The best way to do that right now would be for Jeremy Corbyn and the trade union leaders to call a mass demonstration and mass action against the Tory government to force them out of power.

If this was done around a bold socialist programme it would show that he could fight on behalf of workers and young people, not in the interests of the bosses.

As we have written in previous articles about how to fight the far right and its ideas, the unions need to place themselves front and centre.

The organised working class can unite people around a positive programme and win better pay and conditions for everyone.

This can help cut across the bosses' divide and rule tactics. It is unfortunate that the trade unions did not play a leading role in the demonstration on Sunday.

There is a risk that other organisations can come in and fill the space, exacerbating the situation. Pro-EU organisations present on Sunday's march tried to organise a bloc and had limited numbers on it.

If these organisations are seen to set the tone of fighting against racism it risks adding to the idea that all Leave voters are racist, pushing working-class people angry at the political system closer to charlatans like Tommy Robinson.

As Malcolm X said "you can't have capitalism without racism." It's by fighting for a different world based on collective ownership and democratic planning - for socialism - that we can build a society free from want and misery and end racist divisions once and for all.