From The Socialist newspaper, 2 January 2019

France and Britain demanded large quantities of weapons from the German military as part of compensation for the war. The German negotiators said they needed weapons to defeat the rising German revolution.

The French and British rulers obliged by allowing the Germans to keep an extra 10,000 machine guns to suppress the workers.

Full marks to the Socialist for an outstanding editorial on 21 November on, among other things, Brexit (see 'May's government limps on... Corbyn and unions must call urgent, mass action').

Jeremy Corbyn hasn't taken a clear position on Brexit yet. He just about got away with it for last year's snap election but he can't prevaricate any more. Especially now he might become prime minister if there's a general election and he might have to resolve the mess Theresa May has left.

Some people don't think he would be able to negotiate a different deal to Theresa May. Oh yes he could!

If he made the so-called 'red lines' deep red ones - socialist demands - the EU would be terrified. He could say that a Britain moving to the left doesn't belong in a capitalist club wedded to austerity and private ownership, that Britain is leaving to build a society based on public ownership and workers' rights.

Then the bosses and bureaucrats in the EU couldn't get rid of Britain fast enough, especially if he appealed to French, Italian, German workers to take the same path. The EU would be glad to push us out of the door with the minimum of fuss, to prevent these ideas spreading.

You never know, they might even waive the £40 billion leaving fee! 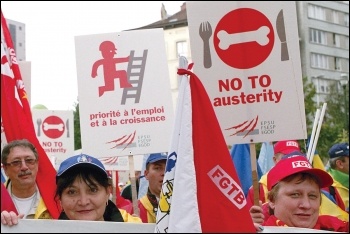 The Merseyside Pensioners Association paid tribute to our esteemed comrade Harry Leslie Smith with a minute's silence followed by a loud round of applause.

Ours, the present, and future generations owe a debt of honour to Harry and his generation who lived through the most desperate times. They lived through the horrors of mass unemployment, the dread and insecurity of ill health, squalid housing, wage cuts, the cruelty of the means test, all under the stewardship of coalition or Tory governments.

As well as championing the NHS, Harry fought the austerity still being ruthlessly implemented by May and her cohorts, who surpass in their callousness even that reactionary government of the 1930s.

And history will damn those Labour councils who, without a fight, implemented those policies.

Electing a Corbyn-led government would be the greatest tribute to Harry and his generation.

The Environment Agency's monthly health and safety update reminds its workers to get flu jabs because we are vital if there's a flood or environmental incident.

But we just got a below-inflation job offer, so they don't really value us! The jabs are not offered through work, but they helpfully say they can be got for £25.