A Southampton primary is refusing to make further cuts and calling for more support from the city council. The Socialist Party plays a leading role in the campaign, which was featured on BBC South news on 3 January.

This follows front-page press coverage for the campaign in the Southern Daily Echo in December. And in November, the Echo ran a prominent article on Southampton Socialist Party under the headline 'Socialists attack city council care closures.' 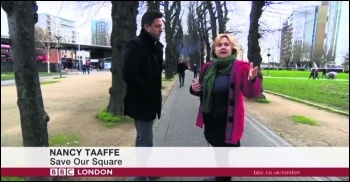 The Socialist Party is part of the leadership of the campaign against the 'monster block'. If the council sends in bulldozers to start removing the square's trees, protesters plan to physically defend them. As the BBC correspondent put it, to "put their neck on the lymes."