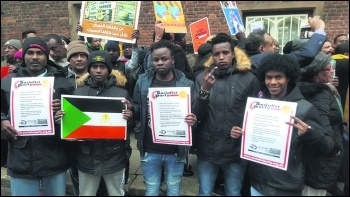 Serge Jordan and Sabah Ahmed, Committee for a Workers' International

Sudan has been rocked by extensive anti-government protests since 19 December.

People in the diaspora have come out in large numbers outside Sudanese embassies to show their solidarity. In contrast, most media outlets in neighbouring countries have been silent.

State subsidies on flour have been removed in River Nile state, tripling the bread price overnight, and provoking the biggest protests in this part of Sudan for years.

After school meal costs were more than doubled, school students and hundreds of other people marched in Atbara. Protesters set fire to the main office of the ruling National Congress Party (NCP) and local government headquarters and ransacked the offices of the notorious NISS security services.

Protests continued into the night and spread to other towns. A state of emergency and curfew was declared in Atbara and all schools were shut down in the city.

On the second day, demonstrations continued in all River Nile towns, despite the state of emergency, and spread to the far east of the country. By 21 December, five states had declared night time curfews.

The government banned all social media apps, shut down the internet, suspended classes, and closed all universities and schools. From the next day, western parts of the country started to rise up in protest.

Sudanese doctors and medical staff launched an indefinite strike on 24 December, calling on other professions to join them. This was followed by a three-day journalists' strike.

A march to the presidential palace on Christmas Day, organised by professional unions and opposition parties, demanded al-Bashir step down. The security forces used brutal beatings, tear gas, rubber bullets, mass arrests and live ammunition. Al-Bashir left the capital Khartoum in fright ahead of the march.

On New Year's Day, 22 political parties withdrew their limited representation in government, called for parliament to be dissolved, and for al-Bashir to step down.

Two days later, al-Bashir said he would increase public sector wages and improve health insurance benefits and pensions. It unlikely to deter the people's will to fight.

Al-Bashir sacked his health minister not long afterwards, trying to blame him for medicine prices and scarcities.

On 6 January protests were the biggest yet, particularly outside the capital where security is less dense and the army rank and file, often from poorer peripheral regions, are no zealous defenders of the regime.

In Khartoum, security attacked demonstrators. They also blocked hundreds of lecturers from Khartoum University from joining a protest outside the university, trapping them inside.

At least 37 people have been killed so far and hundreds wounded. Scores of protesters have been detained and tortured. The repressive actions by regime forces have so far only helped the movement to propagate and radicalise.

Soldiers have been captured on smartphones mixing with protestors, and even protecting them from the police, NISS and regime militias. But even the police stepped aside more than once.

The military command made a public statement in support of the country's leadership, but did not mention al-Bashir, keeping open various political scenarios.

The main leader of the Rapid Support Force, a vicious pro-government paramilitary unit, was filmed telling several thousand troops that they should show "solidarity" with the Sudanese people and that the government was to blame for the inflation that sparked the protests.

Inflation is almost 70% according to government data - some economists put real inflation at double that. The Sudanese pound has plunged in value.

The end of US economic sanctions in 2017 has not improved life for ordinary Sudanese. Instead, with sanctions removed, the regime has no one else to blame.

People sleep in their cars for two days waiting to fill up on petrol and queues of hundreds of people line up to buy bread or withdraw cash from the banks.

In the capital, there are no jobs, even as people migrate from other parts of the country to look for work. It's overcrowded, there is a lack of affordable housing, and violence and crime are rampant.

The protests are explicitly against the regime. Imams calling for obedience to the authorities have been removed from their mosque pulpits, and demonstrators in Al-Nuhud and Al-Gadarif stormed the depots of the Zakat chamber and claimed the stored food for themselves.

Some independent professional unions have called for a general strike, but this hasn't materialised yet. They shouldn't wait.

Now they should start a mass campaign calling on students, young people, poor farmers, unemployed and small traders to join in a mass show of strength to bring down the current regime.

Official workers' unions are tightly controlled by the government and remain silent. The removal of pro-regime union officials from workplaces, their replacement by genuine workers' representatives, and the creation of independent workplace bodies and trade unions are burning tasks.

Popular neighbourhood committees have emerged in some places. If spread to all communities, workplaces and the rank and file of the army, they can help coordinate the resistance against the regime and its repression, maintain order, and organise vital supplies.

They can provide the backbone for an alternative power structure based on the will of the revolutionary people that can seize power from the al-Bashir regime.

Many political parties and opposition forces actually fear a mass movement of the workers and poor as something that can threaten the capitalist system they defend. Some of them, like the National Umma Party, have compromised into alliances with the regime before.

The call by the Sudanese Communist Party to "unite and work together to coordinate the movement" is welcome.

However, as it's addressed to "all opposition parties", it unfortunately fails to draw a line with those sections of the opposition keen to see al-Bashir ousted, but which do not represent a break from big business - their interests are opposed to the class interests of the forces involved in the uprising.

Such a 'technocratic' formula, a military coup, the recycling of old political faces, the involvement of 'fresh' figures from the pro-capitalist opposition, or variants of the above, won't address any of the fundamental problems facing the Sudanese masses.

Building an independent left force that will provide a powerful campaigning instrument for the interests of workers, women, peasants and all poor people in struggle is urgent.

A workers' government is needed, armed with a programme for taking over the assets and wealth of the corrupt ruling clique, nationalising Sudan's major industries and large farm holdings, and drawing up a democratic socialist plan of production to put the needs of the majority at its heart.

The UK protest backing the movement in Sudan began in front of Aljazeera TV who support al-Bashir - before continuing outside the Sudanese embassy in London until well after dark. There were speakers from different parts of the UK who expressed their support for the uprising in Sudan. I spoke to send solidarity from the Socialist Party and condemn the arrest of peaceful protesters. We met two protesters who wanted to join the Socialist Party.