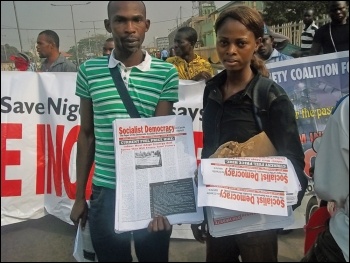 Presidential and national elections will take place on 16 February. With state and local elections on 2 March.

120 people came to Hassan Taiwo Soweto's election rally for Ogun State House of Assembly in the Ifo constituency on 15 December.

Soweto called for a popular movement to fight for the development of road infrastructure, electricity, public education, healthcare and jobs.

He will stand against all anti-poor policies and serve as a bold voice for workers and youth. He will continue to live in the constituency and will not collect more than the salary and allowances of a skilled civil servant.

Olaogun town Chief, Bamigbose, spoke after him, saying that the constituency is larger than six local governments in the state, yet it is the most underfunded. SPN national secretary, Chinedu Bosah, said the Ifo contest was inspiring.

The SPN Lagos State chair, Rufus Olusesan, lamented that Nigerians can no longer beg around to feed themselves, and concluded that "enough is enough of capitalist politicians".

Falilat Jimoh brought solidarity greetings from the Campaign for a Workers' and Youth Alternative. Ayo Arogundade raised the idea of a politician living on minimum wage in the community, a demand that SPN is raising.

The local Tailors' Association chair, Olaoyenikan, encouraged people to vote for a grassroots activist. A local elder, Jegede, said he was inspired by the speech of the candidate at a Community Development Council meeting.

A representative of the Olambe town described the candidate as a David that could overcome the Goliath he is confronting. Mamakofoshi expressed her happiness that an activist is contesting the election.

An election fundraiser raised N45,000 in pledges and N11,500 in cash on the spot. A march and vehicle convoy followed the rally with people pasting up posters and leafleting passers-by.