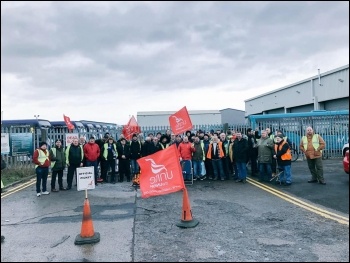 The drivers are seeking a £1-an-hour pay rise to bring them in line with other bus drivers. After protracted negotiations they have overwhelmingly rejected a pay offer of 75p an hour to be phased in over two years in four instalments.

Arriva County Durham Ltd made about £5 million in profit last year but are claiming they can't afford the pay rise of £1 per hour.

Arriva bosses, instead, have embarked on spreading disinformation about pay and are trying to break the strike by running a handful of free bus services and colluding with other transport operators, including their own Northern Rail, to accept Arriva bus passes and free travel for concessionary pass holders on rail services.

Despite this, there is strong support for the strike from the public and this is reflected on social media.

RMT guards at Northern Rail, who are involved in a long running dispute over Driver Only Operation and are also striking every Saturday against Northern Rail's owner Arriva, send their message of solidarity to the Arriva bus workers.

The response from the bus drivers is a massive turnout of hundreds of strikers on the picket lines. Morale is high!

Bus drivers outside of London suffered pay cuts when the buses were deregulated and privatised from the former municipal and nationalised companies in the 1980s. Bus drivers' salaries have not recovered.

Since then the bus industry has been reconfigured and is now controlled by a handful of multinational companies. Arriva is owned by Deutsche Bahn, which in turn is 100% owned by the German government who run it as a profit making enterprise.

Privatisation has led to a massive decline in bus services, bus use, and to a lack of transport planning to provide services to meet people's needs. Good public transport is also essential in the fight against climate change.

The public transport industry needs to be renationalised by the British central and devolved governments, and democratised by its control being passed to the trade unions, elected local authorities, and its passengers.

Nationalisation would also allow the reintroduction of national pay bargaining to pay workers a decent wage and end regional disparities.