Film: Sorry to Bother You

"Socialist film Botox that made me feel young again" 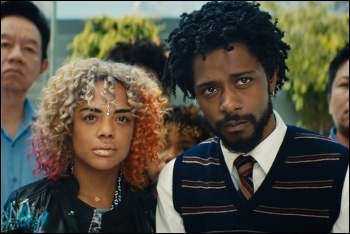 I decided to go and see the film 'Sorry to Bother You' when I saw Boots Riley, the director, being interviewed on Newsnight. It was refreshing to hear him say: "On your own you can't beat corporate, capitalist America". That was enough to make me want to see it.

Sorry to Bother You can accurately be described as a film of two halves.

The first half of the film follows the main character, Cassius 'Cash' Green, a struggling young black man living in his uncle's garage with his girlfriend. She is an aspiring artist who specialises in installations but works most days holding up advertising by the side of the road to make ends meet. They are both struggling to survive in the landscape of the 2007-08 post-crash America.

The very fact that this film opens with a young black couple with dreams of attempting to get the very basics in life, like a home and a job, makes it revolutionary in and of itself.

So much of what we see now on TV or in film is what I like to describe as a 'pretend struggle'. Often the protagonists appear so comfortable that you have a sense from the off that they have no fear of falling through the cracks. Often their petty preoccupations with whatever concerns them leave you cold.

Not so in this film. Cassius is desperate for a telesales job, and you feel the economic and relationship pressures on him to secure and succeed in one.

Once Cassius gets a telesales job he's faced with the joyless grim reality of this modern workplace: broken water fountains and cramped work booths, crass 'team building' exercises and the daily pressure of the modern equivalent of overseers to make the sale.

What is unquestionably revolutionary is the appearance of a young Korean union organiser - a reflection of the new, diverse and young workforce in this sector.

The last time an open union organiser appeared as a character in a film that I saw was in the film Matewan, which was over 30 years ago.

Union organisation and union action in this workplace are a backdrop throughout the film and frame Cassius's struggle.

Danny Glover makes an appearance as an older telesales worker who sits in the booth next to Cassius. He sees young Cassius struggling and suggests he put on a "white voice" to make the sale.

Reviewers have commented that this device is used to reflect white privilege in society, and in particular in the workplace.

For me, the most telling example of why the 'white voice' sells is when Danny Glover explains that this voice denotes confidence: a life of security, of debt-free college education, healthcare and mortgage repayments completely within your grasp.

The 'white voice' reflects comfort and makes the customer feel you are not desperate for the sale, and therefore you will sell more.

The second half of the film takes an abrupt turn. Be prepared for a surreal, often-bizarre future fantasy rollercoaster. Topics covered are AI, the use of robotics, union organisation, strikes, workers' solidarity, and losing your integrity in the pursuit of individualism.

Coming out of the film there was a big group of very young people in front of me all arguing about what the film was about. I overheard one young black man saying that it was so obviously about the need for socialism, that everyone deserves to get paid a living wage and have security without trading their soul. Boots Riley has indeed achieved something if he can provoke such a reaction from the next generation.

Go see it, it's a kind of socialist film Botox - it will make you feel young. Even if you aren't already.