North Tyneside council cuts: march to save our footbridge 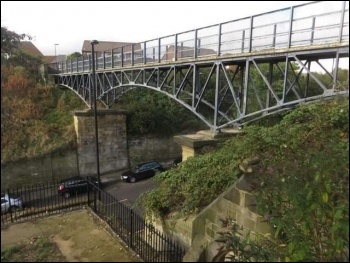 The second meeting of the Save Borough Road Footbridge campaign took place at the Magnesia Bank pub in North Shields on 12 January and was very well attended by around 40 people.

The Labour council's footbridge demolition plan will cause serious hardship to disabled and vulnerable people accessing the town centre.

The meeting was convened not only to decide campaign tactics but also to promote the demonstration and march through the town the following Saturday 19 January, 11am, starting at the same location.

What was disappointing at the meeting was that Socialist Party members, who have been active in the campaign from the outset, discovered that a steering group had been set up behind closed doors to exclude us from a role in building the campaign.

When I and another member challenged the chair on this, we were in effect shut down. From the start a lack of democracy has permeated this campaign, which has been run by Momentum and Labour Party supporters who are determined to monopolise it.

However, we proposed helpful suggestions for the march which were well received in the room. Copies of the Socialist were sold, with people coming up to us asking for the paper.

North Tyneside Socialist Party members will continue to involve ourselves in this campaign, and are confident of gaining support for our programme.