Strengthen ties between the Socialist and workers 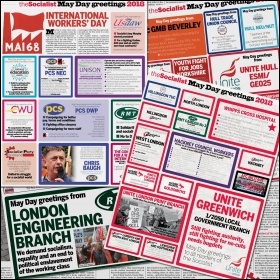 May Day greetings in the Socialist, 2018   (Click to enlarge)

The capitalist establishment is writhing in a trap of its own making: the world economic and political crisis. But still workers and young people suffer its attacks - austerity, low pay, high rents, and more. We believe only working-class action can finish off capitalism - and inaugurate the socialist alternative.

This is why the Socialist newspaper collects greetings for May Day - International Workers' Day. To measure the standing of our analysis and fighting programme in workplaces, unions and campaigns. And by fighting for donations to the working-class press, to advance that standing.

Supporters of the Socialist should use our sign-up sheet: speak with colleagues about contributing to a workplace greeting. It's essential to visit the workers whose strikes we have supported to collect for a greeting as well.

Such messages and money have the highest political worth. But trade unionists should also send a motion for May Day greetings to their respective union committees. Do it now so it gets on the agenda.

Young people are crucial to organise too. Groups of students in school, college and university should hit the streets to campaign for funds to send a greeting.

And while the workplace is the key base of power against the bosses, the battle is not confined to it. On housing, healthcare, women's services - even trees and footbridges - our paper and members have fought.

Help us by asking the community campaigns for greetings. Even our minimum price can be negotiable if needed.

But most important of all - we want you to start now. Select an organiser in your region, trade union group or Socialist Party branch. List the groups you want to ask for greetings. And schedule the time to campaign for the funds.

Last year was another record-breaker, with 112 greetings and over £7,500 pledged. Let's smash our targets again in 2019. Let's get those greetings in!