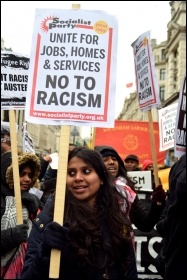 Jobs for all, not racism, photo by Mary Finch   (Click to enlarge)

Black and Asian workers in Britain have to send almost twice as many job applications before we get a positive response. It's clear the anti-discrimination laws are not enough - we need union action for jobs for all.

We have to send 80% more CVs and covering letters, according to Oxford University research. And a comparison of studies finds this hasn't changed since 1969!

Every black and Asian worker here knows personally how many job applications we've sent and how few call-backs we got - eyes be rolling! This is true for most workers right now - but doubly bad for us. I asked a friend who is also of South Asian descent about the problem.

"It is startling to think that I was not the only person who employers seem to hate as my full name contains around 23 letters.

"It meant that I had to use an alias containing only four letters of the alphabet on my applications - and hey presto, the wheels of call-back did actually start to move.

"This was a piece of golden advice given to me by a friend. Use an alias, secure an interview and then at the interview use every skill and grit you possess to secure yourself the job that you applied for. But before you do that, make sure you let them know your full name."

This was the case for him 17 years ago. Fast forward 17 years and there have been no signs of progress.

So what on earth is that legislation on 'race relations' doing other than sitting in the law books?

What we need is strong trade unions leading a fight for jobs. Massive public investment in well-paid jobs for all on trade union conditions, regardless of ethnicity, name length and so on, would start to overcome this problem for all workers.

And trade unions should have democratic oversight of the hiring process, to help ensure bosses provide fair and equal job opportunities for all rather than conscious or unconscious racist practices. In fact, why leave the super-rich bosses in charge at all?

Public ownership under democratic workers' control and management would be the strongest foundation for combating workplace racism - the true power must shift to the real grafters, the working class! Then workers of all races could start to create a democratic, socialist plan to provide for all.