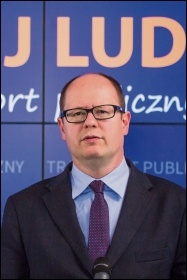 Poland has been rocked by the murder of Gdansk's mayor, Pawel Adamowicz. He was stabbed on 13 January during the finale of a nationwide charity event for hospitals. Adamowicz had taken a liberal position towards immigration and LGBT+ rights.

His attacker, a convicted bank robber who had just been released from prison, claimed he'd been wrongly jailed and tortured by the mayor's former party, Civic Platform (PO).

Widely seen as a political murder, Adamowicz's death has provoked widespread anger against the ruling Law and Justice (PiS) party and its right-wing populist leader, Jarosław Kaczynski, blamed for inciting hate and aggression.

Thousands took part in silent marches all over the country, not only to mourn, but to protest against hate speech and intolerance.

The PiS leadership officially condemned the murder. But some PiS politicians attacked Adamowicz and the opposition even after his death.

The charity, Great Orchestra of Christmas Charity, is particularly hated by PiS and Catholic Church leaders, who believe the Church should have a monopoly on charity and influence on the health service.

No action was taken against the far-right All-Polish Youth, who issued "political death certificates" for eleven mayors in 2017, including Adamowicz.

This murder highlights a dangerous trend in many eastern European countries. The semi-colonial capitalism introduced after the fall of Stalinism has led to the growth of right-wing populism.

PiS came to power in 2015 exploiting genuine anger against the neoliberal policies of the PO government. PO faced huge workers' opposition while in power.

However, PiS has channelled this anger along nationalist lines - scapegoating refugees, immigrants, and LGBT+ people.

The government has become increasingly authoritarian, undermining the 'independence' of the courts and turning state media into a party propaganda machine.

Until now PiS has enjoyed the support of many workers for lowering the retirement age and introducing a new child benefit.

But economic slowdown looms, anger over public sector pay is growing and teachers are preparing to strike.

Neither the liberals nor right-wing populism of PiS can solve the problems of society. The working class needs to unite around a fight against cuts in the health service and education, against attacks on working conditions and the labour code, and for a public sector wage rise.

But above all, it needs its own party with a socialist programme, which will cut across nationalist hate and violence.