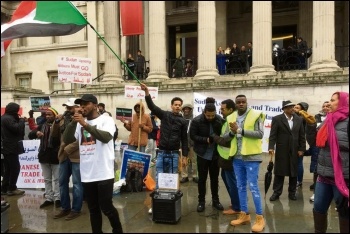 London protest in solidarity with the movement in Sudan, 27.1.19, photo by Paula Mitchell   (Click to enlarge)

For five weeks, demonstrations and mass outrage have continued in Sudan. This is the largest ever wave of protests against the economic policies and human rights violations of the Omar al-Bashir government.

There have been more than 300 protests in 15 out of Sudan's 18 states since 19 December. 50 people have been killed - most of them under the age of 25, including three children. More than 2,000 have been arrested.

On 19 January, there was a strike of teachers, doctors, pharmacists, dentists and university students.

And there have been more student strikes since.

Security officers went to the Buri neighbourhood to arrest people. Inside people's homes they threw tear gas, used rubber bullets, and did the same at universities against striking students.

The government also deployed armed men with their faces covered in vehicles without number plates to run over protesters, causing injuries and death.

Some arrested women reported experiencing sexual harassment and rape inside detention centres. Detainees were tortured and one student was beaten to death on 24 January.

The chant "the people want the downfall of the regime!" is heard throughout Sudan.

17 feeder marches in the capital Khartoum tried to march on the presidential palace on 24 January. The police and security forces used tear gas, rubber bullets and live ammunition to stop them. Two people were killed.

The government blamed infiltrators among the protesters.

Bashir tightly controls the media. Those who try to report on events are severely punished and their publications are confiscated.

Bashir has travelled to Qatar and Egypt to ask for help. The Saudi regime has backed him too as Sudanese soldiers are fighting alongside Saudi troops in Yemen.

Although Qatar hasn't offered financial support yet, these despotic regimes are all supporting this killing and this bloody government.

They do not show any sympathy with the Sudanese people who have been starving under Bashir for 30 years. They fear this movement could inspire renewed protests in their own countries.

The Sudanese regime's links with Saudi Arabia, Egypt and so on are a reason why Trump is not threatening it in the same way he is trying to force regime change in Venezuela (see pages 2-3).

The Sudanese diaspora continues to support the uprising. They gather around the world in squares and in front of Sudanese embassies to condemn the killing and the arrest of peaceful protesters.

Some people also send money home because some children have been left alone with no-one to look after them and no money for food after their family members were arrested. Activists have paid for a student to be treated abroad after he lost his eye when he was shot by state forces.

A march of the Islamist capitalist opposition Umma party calling for Bashir to step down was attacked by police on 25 January. Umma has made pacts with the regime in the past.

The Sudanese Professionals Associations, representing several opposition parties, has called for "the formation of a national transitional government composed of qualified persons, through the consensus of all factions of the Sudanese people, to govern for four years."

But, as the Committee for a Workers' International (CWI) said in December, "past revolutionary experiences have shown time and again what can be expected from such a 'technocratic government': the removal of the discredited figurehead of the regime, and its replacement with a nominally civilian rule - but coupled with the preservation of the pillars of the old state machine and of the riches and economic power of the plundering capitalist elite." 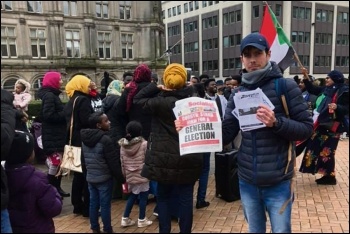 Birmingham protest in solidarity with the movement in Sudan, 27.1.19, photo by Birmingham Socialist Party   (Click to enlarge)

Socialist Party members in London and Birmingham showed solidarity with the Sudanese uprising.

At a lively protest in Trafalgar Square, Paula Mitchell, London secretary of the Socialist Party, spoke in support of workers and young people fighting back in Sudan.

She pointed to the history of the Tory party, Tony Blair and countless other British politicians supporting dictators abroad when it aligns with British capitalism's interests.

And she explained that we have our own fight here - for which we draw inspiration from protesters in Sudan - to get the Tories out. 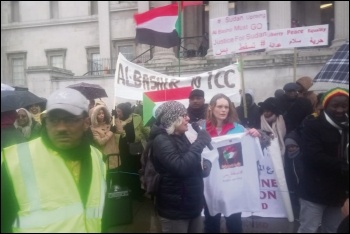 London protest in solidarity with the movement in Sudan, 27.1.19, photo by Mark Best   (Click to enlarge)