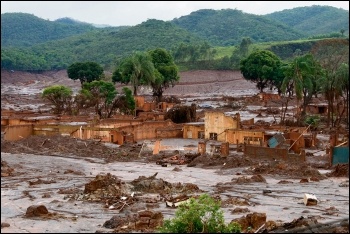 The earlier collapse of the Bento Ridrigues dam, 2015, photo by Senado Federal/CC   (Click to enlarge)

60 people have so far been killed and 292 are still missing after a dam operated by mining company Vale collapsed, releasing a wave of iron ore waste. Nobody has been found alive since 26 January.

19 people died when a Brazilian dam collapsed in 2015. That was another Vale operation.

New far-right president Jair Bolsonaro has attacked women, LGBT+ and black people, promising anti-worker policies. In January he reiterated his call to cut red tape. And just three days before the disaster, he announced plans to privatise large sections of the Amazon river.

The people responsible for the shortcuts and dangerous conditions that allowed this catastrophe must be brought to justice.

There must be an independent inquiry - led by the workers, local community, trade unions and social movements - into what happened.

And these companies, that put safety and the environment last, must be brought into democratic public ownership.